The dream match is upon us. I just hope WWE allows them to let loose and wrestle their true styles instead of the WWE styles only, especially Nakamura. This is sure to get a “fight forever” chant. I’m not an indie snob and I don’t always back the “internet darlings”, but it’s impossible to not be over the moon for this one. The only things better would be an iron man match or a two-out-of-three falls match, but I’m not going to complain. Just drink this one in, maaaaaaaaaaan. 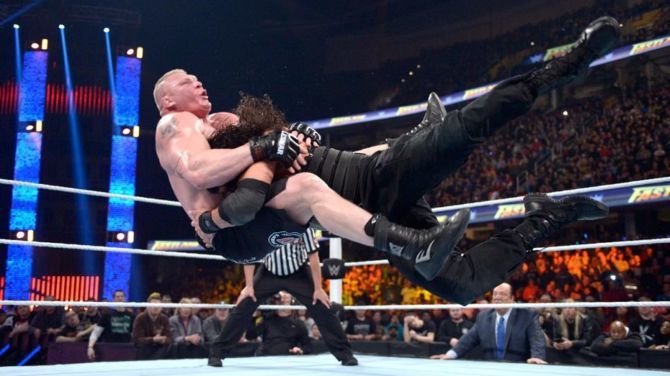 You jackasses are going to ruin this match for me, aren’t you? It just pisses me off that I’ve been looking forward to Roman taking down Brock and bringing the title back to TV for so long now, yet all the smarks are going to boo and shit all over this match because ROMAN IS BORING ROMAN ISN’T COOL ROMAN SUCKS. This match is NOT going to be Styles-Nakamura. But it is going to be pretty awesome, mark my word. It’s going to be fun to see those same smarks stand up and cheer and freak out for a hot second before they realize OH WAIT CHEERING ROMAN ISN’T COOL. BOOOOOOO!!

So there’s the rant. I have very high hopes for the match itself. Sure Brock blows in the ring anymore, but I have some confidence that he can pull a decent performance out of his ass for this one. And whether you admit it or not, Roman is one of the best quality wrestlers that WWE has. Admittedly, WAAAAAY too many Superman punches. That move sucks. And I’ve never seen him hit a spear that he’s actually set up for in like two-three years. Aside from that, it’s going to rock. Expect a lot of false finishes with a lot of F-5’s and spears before Roman finally goes over. Believe that.

Go ahead, throw around your Roman hate. He’s winning. Let’s hear it anyway.