Joey Abs of Mean Street Posse fame is 47 today. He started his career in Matt and Jeff Hardy’s OMEGA, and made some appearances as a jobber on Raw. He also has the distinction of receiving the first ever Stone Cold Stunner, on an episode of Superstars in 1996. His is most remembered as a member of the Mean Street Posse from 1999-2001. Happy birthday Joey.

Al Green would have been 63 today. He wrestled under numerous names in WCW. He was Rage as one half of The Wrecking Crew with Fury (Marc Laurinitis), Blade as one half of the Master Blasters with Steel (Kevin Nash), and The Dog when he returned in 2000. As The Dog, he formed a hardcore tag team with Fit Finlay and Nasty Boy Brian Knobs. He also drank out of the toilet. His contract was not picked up when WWF acquired WCW in 2001. Green died on June 14, 2013, at the age of 57. He had been suffering from COPD for some time before his death.

Former Ring of Honor World Champion Takeshi Morishima, who turn the big 4-0 today, actually wrestled in WWE, I swear. In August 2008 Morishima had a dark match tryout against Charlie Haas for WWE before a Raw in Chicago, defeating Haas in three minutes with a missile dropkick. He then beat Jamie Noble the following night in another dark match, this time for SmackDown, but he was signed signed to a contract. Happy birthday Takeshi.

Jimmy “Burrhead” Jones was born Melvin Nelson in either 1936 or 1937, and worked in the family’s cotton fields for several years before moving to New York City at age 17.

Nelson began training with professional wrestlers at a gym near the store where he worked. After gaining muscle and learning how to wrestle, he was given the ring name Jimmy Jones by Vincent J. McMahon upon being hired to compete in the World Wide Wrestling Federation. He competed in occasional matches for the WWWF from 1968 to 1971. His WWWF stint included a match against Ivan Koloff, who went on to win the WWWF Championship two months later.

Nelson also competed in several other promotions, as many wrestling organizations in the United States were racially segregated and there were not enough African Americans in any single promotion to provide sufficient competition. As a result, Nelson also worked as a referee when no African American opponent was available.

Nelson’s ring name was changed as a joke by promoter and wrestler Billy Hines. He told the media that Nelson would be competing as Cockleburrhead Jones, although the promotion later shortened the name to Burrhead Jones. The name which some people believe to be a racial slur, was a reference to Nelson’s afro hairstyle. 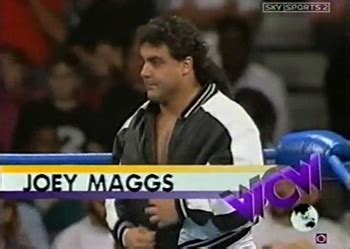 “Jumping” Joey Maggs wrestled in WCW and WWF from 1991-98. Some of his more notable moments were losing to Sid Vicious at Clash of the Champions XIV one month after his debut in 1991, losing to “Stunning” Steve Austin in a match for Austin’s WCW World Television Championship at Clash of the Champions XVI, losing in the first round of the WCW Light Heavyweight Championship Tournament, he and The Italian Stallion losing to Arn Anderson and Bobby Eaton, losing to Rick Martel and Yokozuna on different episodes of WWF Prime Time Wrestling, getting beat up in WCW by Big Van Vader, and winning a match against Disco Inferno.

Unfortunately, Joseph Magliano died at home on October 15, 2006, at the age of 37. The cause of death is not public knowledge.