It’s a 2-2 tie today. Let’s hope it stays that way and I don’t kill someone like I did Dirty Dick Slater yesterday by requesting no wrestlers die after I publish the post.

Toni Storm, one of my current favorite wrestlers, turns 23 today. Born in New Zealand and raised in Australia, she made her professional wrestling debut when she was just 13 for Impact Pro Wrestling Australia. She convinced her mother to let her move to Liverpool, England with her grandmother so she could become a better wrestler. She trained under Dean Allmark at his All Star Wrestling school. Storm took part in a WWE tryout camp in Melbourne on the 2014 WWE Australian tour and the 2015 WWE UK tour.

Storm made her debut for Progress Wrestling on 14 April 2015, and became the first ever Progress Women’s Champion in May, 2017. In June of 2017, WWE announced Storm as one of the first four participants of the Mae Young Classic. Storm entered the tournament on 13 July, defeating Ayesha Raymond in the first round. She defeated Lacey Evans in the second round and Piper Niven in the quarterfinals before being eliminated from the tournament in the semifinals by Kairi Sane.

Storm returned for the 2018 Mae Young Classic, and thus far has defeated Jinny, Hiroyo Matsumoto, and Mia Yim to advance to the semifinals against Meiko Satomura. She’s my favorite to win the tournament. Happy birthday Toni. 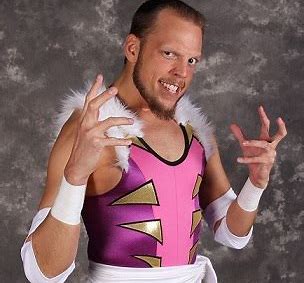 Robert “R.D.” Evans turns 35 today. Born in Canada and trained in Texas, Evans wrestled on the Texas independent circuit from 2001-10 before joining Ring of Honor and Chikara. In 2011, PWI ranked him #348 of out of the top 500 singles wrestlers in the PWI 500. He made one appearance for WWE in 2013, taking part in an interview segment on SmackDown during which he was slapped by Ryback. In 2016, he joined the Raw creative team, and is still a writer for Raw today. Happy birthday Robert.

We lost a big one on this date: Michael Hegstrand, known as Road Warrior Hawk as one half of the legendary Road Warriors/Legion of Doom with Road Warrior Animal. Hegstrand had started his career as part of the Traveling All-Stars. He was billed as “Crusher Von Haig” and wrestled in Vancouver. In 1983, fate struck, and Animal’s partner for the night would find himself in legal trouble. Needing a quick replacement, Ole Anderson gave Hawk a call. They would be paired together again, this time as tag team partners. Anderson gave them the name the Road Warriors. Neither man knew at the time that they would make wrestling history that day.

When Paul Ellering was looking to put together a stable of heels in Georgia Championship Wrestling called The Legion of Doom it was decided to pair Joe Laurinaitis with Hegstrand and change their names to “Animal” and “Hawk” respectively; thus, The Road Warriors were born. To look more intimidating the two shaved their heads into Mohawks and started wearing studded dog collars, leather chaps, and face paint. The look and name was taken from Mad Max 2: The Road Warrior, helping to paint the two as no-mercy monsters. Their interview style was vicious, yet charismatic and a bit humorous. Hawk was known for often beginning his promos with his trademark yell of “WELLLLLLLLLLLLLL!…” and ending with his catch phrase of “OOOOOOOOOH, WHAT A RUUUUUUUUUUUUSH!”

Their hard hitting style, no nonsense attitude, and winning ways made the Road Warriors fan favorites wherever they went; even when they were booked as heels, the fans refused to boo them. Near the end of 1988, the Road Warriors captured the NWA World Tag Team Championship from The Midnight Express whom they mauled in short order to win the titles in New Orleans. Despite being heels at the time and using brutal tactics against Stan Lane and “Beautiful” Bobby Eaton, once again they were cheered by the crowd.

The Road Warriors signed with the WWF in 1990, and often teamed with The Ultimate Warrior against Demolition. Just over a year after signing with the WWF, the Legion of Doom won the WWF World Tag Team Titles from The Nasty Boys at SummerSlam 1991 and held them for about six months. When they lost the titles in February 1992 they were briefly taken off television, only to return with long-time manager Paul Ellering by their side, as well as a wooden dummy called “Rocco”. Both members of the L.O.D. thought the gimmick was stupid, as did most of the fans and it led to Hawk quitting the WWF, leaving Animal on his own for the first time in 9 years. When Animal suffered a severe back injury a short while later, everyone thought it was the end of the legendary team.

Hawk competed as a singles wrestler in Europe and Japan and although he won nearly every singles match he competed in, he was still considered a tag team wrestler. Thus, he always fought either mid-card opponents or made teams with better-known singles stars. When he joined New Japan Pro Wrestling he was immediately paired with Kensuke Sasaki, then simply known as a good mid-carder, as the Hell Raisers. The two dominated NJPW’s tag team ranks for a while through their two wins of the IWGP Tag Team Championship, but no North American promoter thought about bringing them as a team, due to Sasaki’s affiliation with NJPW. As a singles wrestler, Hawk found success in Europe, winning the CWA World Heavyweight Championship. Hawk also competed in NWA Eastern Championship Wrestling, the precursor of ECW, in 1993.

During his run in WCW in 1995, Hawk reunited with Animal and reformed their popular tag team. They would return to the WWF in 1997. Unfortunately with WWE now in the “Attitude Era”, Legion of Doom was placed into a storyline incorporating Hegstrand’s real-life drug addiction and alcoholism, against the wishes of both Hawk and Animal. The storyline found the Legion of Doom crumbling as Hawk repeatedly showed up to matches apparently drunk or under the influence of drugs, and began demonstrating suicidal tendencies. In order to stabilize the team, a third member, Puke, was introduced. This led to the conclusion of the storyline, in which a suicidal Hawk climbed to the top of the TitanTron, while Puke, supposedly attempting to rescue Hawk, climbed after him, only to apparently throw Hawk over the side. Puke then revealed that he had been enabling Hawk’s drug addiction in order to kill him and take his place in the Legion of Doom. Being forced to act out Hegstrand’s personal demons onscreen eventually proved too much for both Hawk and Animal, and both men quit the company shortly after the “Puke killed Hawk” incident.

Animal and Hawk made a surprise appearance on raw on May 12, 2003 when they took on Kane and Rob Van Dam for the World Tag Team Championship. Although Hawk and Animal came up short in their attempt to become three-time champions, it was clear that Hawk had defeated the demons that had once kept him from competing, and the Road Warriors had hopes of returning to WWE. But tragically, Hegstrand died on October 19, 2003 in the early morning in his home in Florida. He was 46 years old. His friends said that he and his wife Dale had recently bought a condominium near their current home and were packing their boxes the night before. Hegstrand said that he felt tired and went to take a nap. When his wife checked on him at about 1 a.m., he had died of a sudden heart attack. At the time of his death, Hawk and Animal were working on a book about their careers.

Mike Graham was the son of WWE Hall of Famer Eddie Graham. He started wrestling in 1972 in his father’s Championship Wrestling from Florida. In the 80s he wrestled for the AWA, then returned to CWF in 1989 to form a tag team with Dusty Rhodes. In the 1990s, he became a road agent for WCW. Along with Paul Orndorff, Pez Whatley and DeWayne Bruce, Graham worked as a trainer in WCW as part of the WCW Power Plant. At Slamboree 1993, Mike represented his father when he was inducted into the WCW Hall of Fame.

Mike Graham worked with WWE in early 2006 on a DVD about Dusty Rhodes. He has appeared on WWE 24/7’s Legends of Wrestling series as part of a panel which discussed famous pro wrestlers of the 1980s. He hosted classic episodes of Championship Wrestling from Florida on WWE 24/7 Classics.

In March 2012, Graham teamed with long-time friend and tag-team partner Brian Blair, Lanny Poffo and Carlós Colon to defeat the team of Ron Bass, Larry Zbyszko, The Masked Superstar, and Gary Royal in an eight-man tag team elimination match at a Pro Wrestling Superstars at an event which featured former Championship Wrestling from Florida talent.

Graham’s father was inducted into the WWE Hall of Fame in 2008. Mike represented his late father at the ceremony and the following night at WrestleMania XXIV.

On October 19, 2012, Graham became the latest male in his family to tragically end his life. As both his father and son had done before him, he died of a self-inflicted gunshot to the head. He was 61. His grandfather and uncle also committed suicide.

I feel like this is a good time to state that if you or anyone you know are having suicidal thoughts, please call the National Suicide Prevention Lifeline: