Simon Gotch turns 36 today. In NXT and on the WWE main roster, he was one half of the Vaudevillains along with Aiden English. There was a rumored backstage fight between Gotch and Sin Cara in mid-2016, with Gotch, and vicariously English, taking all the punishment from that. He was removed from live events with a black eye, and it was reported after that that he had heat with other wrestlers, and that his mouth would get him into trouble. Personally, I love his opinions and his interviews since he left the company. It seems he didn’t conform to keep your head down and your mouth shut unless you’re a main eventer.

He was released from his WWE contract in April of 2017. Once is 90-day non-compete clause was up, he began wrestling on the indies as Simon Grimm, but as of earlier this year, WWE dropped their trademark of Simon Gotch, so he has gone back to using that name. Happy birthday Simon.

John Nord, who wrestled under such names as The Barbarian, Nord the Barbarian, The Berzerker, The Viking, and Yukon John, turns 59 today. He began his career in the AWA, where he was known as Nord the Barbarian and frequently teamed with Bruiser Brody. He was named PWI’s Rookie of the Year in 1985. He went to WCCW in 1987 and feuded with Kevin Von Erich over the WCWA World Heavyweight Championship. He returned to the AWA in 1989 as Yukon John, and formed a team with Scott Norton called the Yukon Lumberjacks in 1990.

He made it to the WWF in 1991 as The Viking. His name was soon changed to The Barbarian, and was given Mr. Fuji as his manager. He feuded with The Undertaker, and once tried to stab him with his sword. He had a good year in 1992, in which he competed in the Royal Rumble, won a 40-man battle royal on WWF Prime Time Wrestling, and (unsuccessfully) challenged Bret Hart for the WWF Championship.

He left the WWF in 1993 and competed in All Japan Pro Wrestling from 1994-97 under his real name. He was in a tag team there with Stan Hansen. He returned stateside in 1997, wrestling under his real name in WCW. He had an undefeated streak that ended with a loss to Goldberg, who, as we all know, had quite a streak of his own. He had a short-lived tag team with Barry Darsow before leaving the company in 1998, and has been retired from wrestling ever since. Happy birthday John/Barbarian/Berzerker.

That’s it for today, so please, no wrestlers die, because I don’t want to have to update this.

UPDATE: You’ve got to be kidding me. I now feel responsible for this death that I learned about as soon as I woke up today: 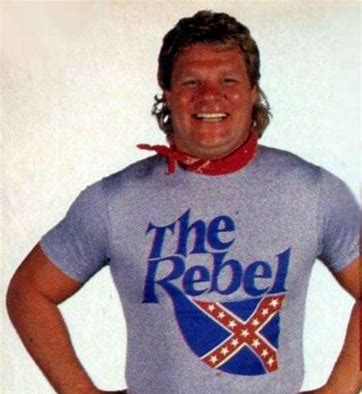 “Dirty” Dick Slater was a staple of the old territory days. He wrestled for Georgia Championship Wrestling from 1972-83, Mid-Atlantic Championship Wrestling from 1983-85, and Mid-South Wrestling from 1985-86 before landing in the WWF in 1986. He only lasted 10 months there and was mainly used as a jobber before heading to Japan to wrestling for AJPW. He returned to the US in 1989 and found some success in WCW, where he tagged with our birthday boy The Barbarian and won the WCW United States Tag Team Championships. He was a part of Col. Robert Parker’s “Stud Stable” along with Arn Anderson, Bunkhouse Buck, and Meng from 1994-96. He formed a tag team with Mike Enos called Rough n Ready, and they feuded with Harlem Heat of the World Tag Team Championships, but never won the gold.

He blew out two vertebrae during a match later that year, and that ended his wrestling career. Unfortunately the next notable thing that happened Slater was in 2004, when he was convicted for the stabbing of his former girlfriend Theresa Halbert. He was sentenced to one year of house arrest and two years of probation. He blamed the incident on influence from painkillers. In 2015, Ric Flair stated in an interview that Slater was living in a nursing home, was “unrecognizable”, and was not letting anyone see him. Slater died today at the age of 64. No cause of death has yet been reported.