Some very recognizable birthdays today as well as two deaths.

Amazingly, Scott Hall has made it to 60 years old today. Hall began his career in 1984, feuding with Dusty Rhodes in Championship Wrestling from Florida. He and Dan Spivey soon formed a tag team, called American Starship, and were sent by Rhodes to work in Jim Crockett’s North Carolina territory. Hall was Starship Coyote and Spivey was Starship Eagle. Yes, really. They wrestled so infrequently that they were actually given grounds crew jobs for the local minor league baseball team, the Charlotte Orioles, also owned by Jim Crockett. Eventually they did get a chance to wrestle Arn and Ole Anderson for the NWA National Tag Team Championship, but were defeated.

They moved onto the NWA Central States territory in Kansas City. They received a title shot at that promotion’s tag team belts, held by Marty Jannetty and “Bulldog” Bob Brown, but were still unable to capture gold. The two split up when Spivey left for Jim Crockett Promotions while Hall stayed in Kansas City. He soon joined the AWA as “Magnum” Scott Hall, and later “Big” Scott Hall (they were so creative in the 80s). Verne Gagne, the owner and promoter of the AWA, had wanted to push Hall to the same heights as he had Hulk Hogan after Hogan left for the WWF. Gagne had Hall use mannerisms and moves similar to Hogan.

Hall formed a tag team with his more experienced friend Curt Hennig, whom he later would credit for cultivating his early professional wrestling career. The team defeated Jimmy Garvin and Steve Regal for the AWA World Tag Team Championship in 1986. After losing the titles, Hall and Hennig soon parted ways. Hall then received shots at the AWA World Heavyweight Championship against Stan Hansen and Rick Martel. Although Gagne wanted to put the belt on Hall, Hall hated the cold weather in the territory, recognized the AWA as a “sinking ship,” and left for WCW in 1989. The AWA folded the following year.

His first stint in WCW was uneventful after he was brought in by Jim Ross. His only notable moment was getting to wrestle in a King of the Hill battle royal at the 1989 Great American Bash. He left in 1990 and wrestled for the World Wrestling Council, winning the WWC Caribbean Heavyweight Championship. In 1991, he returned to WCW as The Diamond Studd, part of Diamond Dallas Paige’s “Diamond Mine” stable. You see, they like diamonds. His second WCW run was only slightly better than the first, and he left for the WWF in 1992, and that’s where his career took off.

It was in WWF that he debut as Razor Ramon, obviously based on Tony Montana. His “Diamond Death Drop” finisher was renamed “The Razor’s Edge”. Razor feuded with the likes of Randy Savage, The Ultimate Warrior, and Bret Hart. His most notable feud was with the 1-2-3 Kid, who later became known as X-Pac. Then known as The Kid, or more accurately, unknown, he pinned Razor after a moonsault in what still might be the biggest upset in Monday Night Raw history. The two continued to feud as Kid received a push, and then later teamed together when Razor turned face. Razor was also a four-time WWF Intercontinental Champion.

And we’ve finally reached the point you all have been waiting to read about. Hall left the WWF and returned to WCW for a third time in 1996, not for the money, Hall says, but because they offered him days off. Hall interrupted a match between Mike Enos and Steve Doll on the May 27, 1996 episode of Nitro, and really made people think the WWF was invading WCW:

Two weeks later he was joined by Kevin Nash, and the two became known as The Outsiders. WCW actually had Nash and Hall announce on air that they were not sent there by the WWF in order to avoid legal action. They were later joined by Hulk Hogan at the 1996 Bash at the Beach in one of the most famous moments in wrestling history.

NWO t-shirts are still seen at wrestling events to this day, and still sell in good numbers. An NWO reunion was recently announced. It’s probably the most popular and well-known group in wrestling history except for maybe the Four Horsemen, despite what DX would like us to believe. So there’s the good of Hall’s career. Unfortunately that good went along with a lot of bad, mostly due to alcohol and drug abuse. He was suspended numerous times and missed a lot of shows, and in one of the more infamous stories in wrestling history, in 1983, Hall was charged with second degree murder after shooting a man with his own gun (after wrestling it away from him) in an altercation outside of a nightclub in Orlando, Florida. According to Hall, this was done in self-defense. The charges were dropped due to lack of evidence. In a 2011 interview for ESPN, Hall admitted killing the man and said he is unable to forget the incident.

While he has had a few relapses in recent years, Hall has mostly gotten his life back together. In early 2013, DDP invited Hall into his home in order for Hall to stay sober and “rebuild his life from the ground up… physically, mentally, professionally, and spiritually.” Page also initiated a fundraising drive, which raised nearly $110,000 ($30,000 over their $80,000 goal) to pay for hip replacement surgery and dental work for Hall. Kevin Nash inducted Hall, as Razor Ramon, into the WWE Hall of Fame in 2014. Happy birthday Scott. 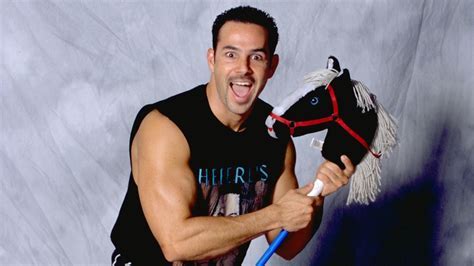 Chavo Guerrero Jr. turns 48 today. The nephew of Eddie Guerrero started his career in Mexico and Japan before joining WCW in 1996. His first title shot came three months after his debut when he wrestled Ric Flair for the WCW United States Championship. In 1998, he began a program with Eddie Guerrero in which Eddie would try to make Chavo use heel tactics to win. Eventually, Guerrero’s treatment at the hands of Eddie would drive him “crazy,” and he adopted the gimmick of a psycho fixated with a wooden he dubbed “Pepé.” See Pepé above. Pepé was eventually murdered, being thrown into a wood chipper by Norman Smiley. He engaged in various storylines between then and WWF’s purchase of WCW.

In WWF, he teamed with Eddie as Los Guerreros, first as heels and later as babyfaces. They won a triple threat match at the 2002 Survivor Series to win the WWE Tag Team Championship. After losing the belts, Chavo became jealous of Eddie’s growing popularity and WWE Championship ambitions and turned on him. Chavo Sr. entered the feud, teaming with his son. Chavo Jr. lost to Eddie at the 2004 Royal Rumble to end their feud. And let’s end there because we are going to forget the Kerwin White ever happened. Happy birthday Chavo.

Douglas “Ox” Baker joined the WWWF in 1967 as The Friendly Arkansas Ox, but only wrestled a few matches there before becoming a journeyman through the territories. He was certainly no friendly Ox, as alluded to by the popular catchphrase he would use for the rest of his career: “I like to hurt people!”

On June 13, 1971, Baker and The Claw teamed up against Alberto Torres and Cowboy Bob Ellis. Torres was injured during the match and died three days later. Though evidence indicated that Torres died of a ruptured appendix, Baker’s Heart Punch was blamed by wrestling promoters, and the death was worked into his heel character. What a different time it was.

On August 1, 1972, Baker lost to Ray Gunkel. Following the match, Gunkel died in the locker room. His death was attributed to a blood clot, which broke off from a hematoma caused by Baker, which led to a heart attack. Again, the death was worked into Baker’s character, and in 1974, Baker caused a riot in Cleveland for continually Heart Punching an opponent after the match was finished.

In his career, Baker won 28 championships across 19 different promotions, and was elected into the New England Pro Wrestling Hall of Fame in 2009. He also made appearances in fighting roles in Jackie Chan’s The Big Brawl and John Carpenter’s Escape from New York. Baker died of a heart attack on October 20, 2014 at the age of 80.

Stan “Krusher” Kowalski turned down a chance to play football for the Packers to instead become a professional wrestler. He joined the Navy at age 17 and served on a Pacific submarine for three and a half years during World War II. After the war, he joined the University of Minnesota wrestling team and it was there where he met local promoter Joe Pazendak, the University’s unofficial assistant wrestling coach.

He debuted for one of the NWA’s many promotions as Buddy Marco before changing his name to Krusher Kowalski. He formed a tag team with Tiny Mills called Murder Incorporated. They wrestled together in Canada, Japan, Australia, New Zealand, and the United States. They won the Minneapolis version of the NWA World Tag Team Championships twice while working for the NWA Minneapolis Wrestling and Boxing Club. When that promotion became the AWA in 1960, Mills and Kowalski became the first AWA World Tag Team Champions. Kowalski later managed future WWWF World Champion Ivan Koloff.

In 1969, he has a brief appearance in an Ohio promotion, Ohio Wrestling Classics. Then, in 1970, he went to New York to wrestle in the WWWF as Krippler Karl Kovacs. In one match againt Bruno Sammartino, they set a then-attendance record as well as a gate record of $86,000

After retiring from professional wrestling, Kowalski owned a night club with wrestler Blackjack Daniels, worked as a police officer, union negotiator, and business agent. He resided in Minneapolis where he was active in charities, fundraisers, and speaking engagements. He volunteered with the United Way and helped homeless veterans. Kowalski received a Lifetime Achievement Award from the Improved Order of Red Men in 2016, and the VFW presents an award named in his honor.